I've not done a Lake District AL for a few years now - Duddon Long back in 2008 I think was the last time where I came 52nd in 3h44. Diary clashes / shift work for Teresa and injuries have put paid to me getting to one last year or so far this year, but made me more determined to fit one in as these Classic Long Lakes fell races really are what fell shoes were invented for. Running across high fells & windswept ridges at speed really is an invigorating feeling. And one that I'd really missed.
Chris was also keen to enter and I knew how serious these AL's can get so warned him away from entering and emphasising why the FRA require previous similar race experience.  To compensate, I promised him a great run on the fells, probably pushing him further than he'd been before and suggesting a route to him that would ensure he bit off a fair old chunk of lake district experience. 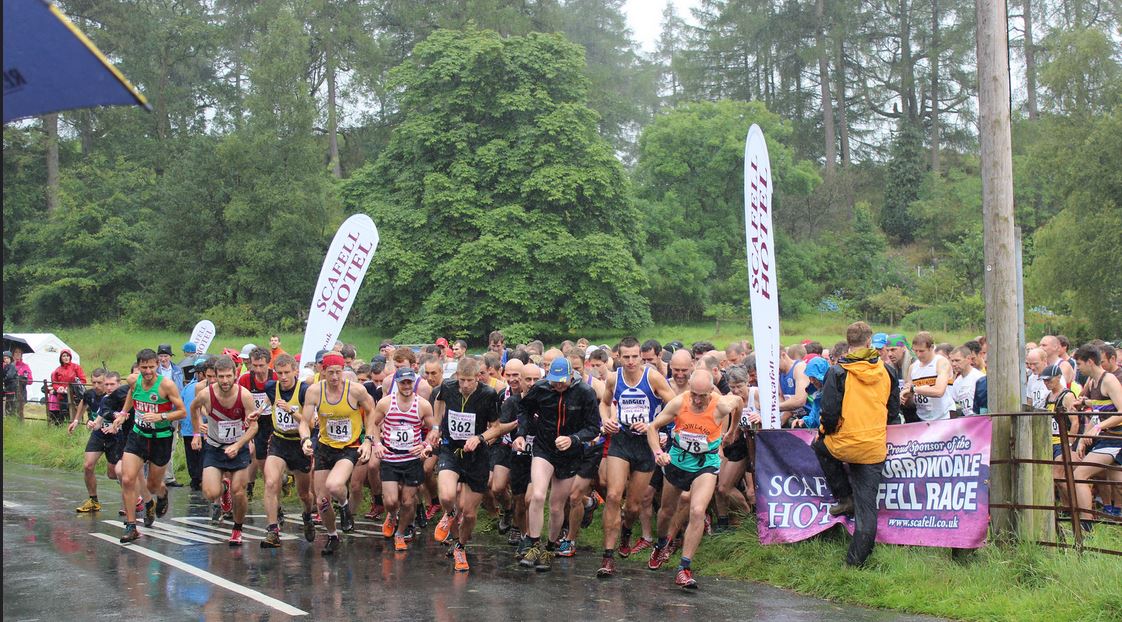 We both headed up Friday and kipped in the car ready for the off at 11am from Rosthwaite the next morning. After a couple of strong coffees in Costa, Keswick we headed down Borrowdale in the partial gloom parking in the fields with around 1 hour to go. Just enough time to sign on, see some of the big names hanging around and get just a little bit nervous !! The rain was only just about keeping off but after a reccie of the line up Bessy Boot - it soon started coming down again just in time for the start by Andy Schofield.

I'd forgotten that the first offroad lane narrows really quickly, and hadn't got near the front enough so was caught up in a queue after no more than 100m of running ! Only lost about a minute which on a 4-5 hour race is no big deal whatsoever. Lots of big boys around - I was especially surprised to see Steve Birkinshaw racing again so quickly after him rewriting the record books on his Wainwright round. Stephen Pyke also glided past me as soon as it went uphill. Past Chris on the way up the first fell and that was it - proper steep stuff all the way to the summit of Bessy Boot which by now was fairly full on claggy & windy. I was really looking forward to the next section to Esk Hause which involved following fairly indistinct trods along the side of the Glaramara ridge. I soon found myself running behind Darren Fishwick (founder of the term Fishwicking!) and Steve Birkinshaw, but mysteriously heading up and right, then further up and right then more up and right. Of course, at race pace when there's almost a dozen of you running together why should I question which way we were going ?? Especially when one of you is called Steve Birkinshaw ?  The map extract above shows us doing what every aspiring fell racer should aim to do a few times in their career - run completely round in a circle without having a bloody clue ! Now lets get this right - it was horizontal rain from the SE and proper clag so stopping to look at the map wouldn't have been the most intuitive thing to do.  From the gps trace, I estimate we lost around 8-10 mins here.

When I eventually rejoined the race train further south, there was noticeably more runners around so it was clearly time to try and start making up ground. I lost around 100 places between Bessy Boot and Esk Hause - luckily I wasn't aiming for a time or place on this race - good job !

The route from Esk Hause to Scafell was thick in mist all the way and littered with the boulders I remembered - proving to slow everyone down substantially. I soon recognised the big col before Scafell pike summit from our recent Bob Graham exploits, so as soon as I got there I kept a look out for runners descending to my right - picking out the scree descent top. And sure enough after 50-100m, I saw the first runners heading down. A quick dib at the summit and head back down to where I saw them go and sure enough - peering over the lip looking NW I could see the infamous scree descent taking us down to the Corridor Route below.
The descent was way more pleasant than I'd expected, so in no time I was at the corridor route where my progress slowed quite a bit on the wet rock and bog. There are some tricky sections on this and it's easy to see why Wasdale Mountain Rescue really do discourage people from attempting the 3 peaks in 24h challenge - especially when novices often tackle this section in the dark.  As it happens, it seems that one runner seriously came a cropper and 'wharfeego' was first to the scene and had to make some very very tricky decision (moving an apparently paralysed runner) which fingers crossed have saved his life.

From Styhead I cruised past 22 runners to move from 136th to 114th by the summit (full splits here) - but then again 8 of those had overtook me on the descent it seems ! I was apprehensive of the section from Wasdale summit to Windy gap as I remember some very tricky terrain from both mine and Saul's BGR's. Thankfully, I followed a brilliant line which I think was almost E from the summit, then NE, then N to the gap. The section to Honister was again fantastic. Clag, rain and trods - virtually all runnable. It seems I took 9 runners here, only stopping to top up water at the stream just before the slate mine. Legs felt great, so straight through and up Dale Head. After taking another 7 runners and stopping for a quick pee it was onto another section I'd not been looking forward too (ok, that's EVERY descent I'd probably not looked forward too!). From Dale Head summit it was a descent first to the tarn and then through some rocky mine workings to the finish.

As it happens, the descent to the tarn was fantastically runnable if steep, followed by a small rise over the lip of the tarn before the plunge down through the disused mine workings which again wasn't half as bad as I'd been lead to believe. In fact, despite there being about 20 people shortly behind me at the top of Dale Head - only 1 overtook me on the descent. Now that hardly ever happens !!!

Crossing the finish line in 4h16 I had had a fantastic outing in the Lake District Fells. Whats more - so had Chris - he'd loved the challenging conditions on the ridge and the long solitary descent out via Langstrath so it was win, win for us both. Wish we could have hung around but we had to get back really.

I had much better conditions last night than you did. its lovely in the dry but in the wet the boulders on Broad crag and Scafell bike are a nighmare. Pleased with my run out to scafell Pike then back over esk Pike and Bow fell last night. Only 19km! 3 hrs 20mins. Legs getting stronger but can't see me doing any races an=nytime soon! Peter