Well, lets be upfront about this. That race was ABSOLUTELY FANTASTIC. I'd go as far as to say it's my favourite race I've ever run. {Post Script : Joint Best with Fellsman}

I've always liked long Lake District horseshoes. Anything from my 2nd ever fellrace - Fairfield Horseshoe, up to longer ones I've completed like Duddon and Borrowdale and then onto the Super Longs which I'd not done yet - Wasdale, Ennerdale and this one Buttermere. I ranked Borrowdale and Duddon as two of my favourite races. They're just long, hard and stunning. So, surely a super long would just be more of the above?
I'd not entered anything of note really this year yet, but thoughts were turning to something longer later in the year perhaps with the 3x3 Ultra in October? I had unfinished business there after last year. I'd also pledged to myself that I'd try and get one Lakes Long under my belt each year. Teresa's work schedule seemed to coincide with most lakes longs - apart from this one. Perfect - a quick text and my entry was in the post. 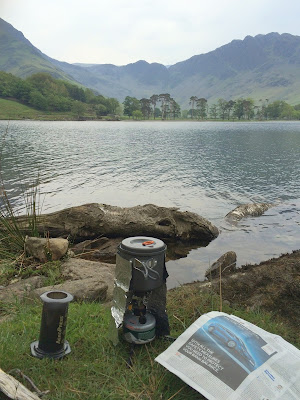 This race appealed more than many others for a couple of reasons - it looked really hard and was in an area of the lakes I love - we often stop at The Kirkstile Inn normally on their winter break deal. It was the place I proposed to Teresa 13 or so years back. Also, it looked like it was more grassy than a lot of the other lakes super longs - suiting me as descending on rocks is my big weakness. Tick!

I headed up Friday after work and parked up in Gatesgarth for the night. Second plan for the weekend was to get some nice early morning shots of Buttermere or Crummock. I was up about 6ish, but sadly the cloud was just a big grey blanket so lighting couldn't have been much worse. Nevertheless, I got some nice shots including the reflection above and my breakfast (iphone shot) left.

Race started at 11am so several leisurely photo stops by the two lakes before parking up just down from Loweswater Village Hall. Unpacking the car - everyone was in running vests and I had to borrow some suncream from a fellow runner. Things couldn't be looking any better! Talk at the start was of two fell running records which were being tackled this weekend - Jez Bragg having broken the Ramsay Round in Scotland (circuit of Ben Nevis, Aonach's, Grey Corries, Outliers plus the whole of the Mamores) and Adam Perry tackling the lakeland 24hour record - currently at 77 peaks. He was aiming for 78 peaks. To honour Adam's record attempt - the previous record holder and fell legend - Mark Hartell headed back from California to run the Buttermere Horseshoe and go on and support Adam's attempt later in the day. Nice to see him on the start line! Simon Booth (UK Fell champ and course record holder) was also out but I didn't expect to see much of him !
I took this shot above on the start line - it always fills me with awe that I'm about to run over everything I can see - and then some. Just after 11am Darren's dad sent us on our way and there was some friendly chat and banter on the way to the first climb. Even the first climb up Whiteside was relatively social - meeting Kieran from Erewash RC (who knows Andy W). Taking care to not approach anything like the red zone, I was cautious to keep things 'under control'.

After Whiteside was Gasgale Crags (shot at bottom) - fast ridge running on the way to Hopegill Head (I'd forgotten there was a control here so was gobsmacked to see marshalls. MUST CONCENTRATE!


From Hopegill Head things started to go off path. Contouring round Sand Hill then down through nice fast shale to Coledale Hause and off up the long climb to Grassmoor. Some folks took a northerly route along the edge more. Me and a few others in front took a more direct(?) line south of the ridgeline. Splits show I was slightly down here (30secs) so may try the ridge (and trod) next time.

After Grassmoor it was all really good running to Whiteless Pike. It's hard to picture sizes of peaks from a map, but I expected Whiteless Pike to be a nobble at the end of a ridge. In reality there was fantastic ridge running including a descent / reascent to a really impressive peak that at first was way way in the distance. "That can't be my peak way over there" I though. Check map. "Bugger, it is"! The views here were sensational with the top drifting in and out of cloud.

After Whiteless the fun really began. We took the south east descent line (which apparently this race shares with the Teenager with Altitude fellrace) which is an absolute classic. First very steep, then steep, then fast all the way down to Sail Beck before the pull up to Newlands. What a classic descent !!!! My phone was in my waterproof case by now and I regret not taking shots of Whiteless Pike and that view of the descent. Absolutely fantastic stuff.
From Newlands it was a very steep climb up to the right of the stream around Buttermere Moss. An area I'd never been to before. Proper middle of nowhere stuff, great. Reminded me of the Fellsman. Hard bog as far as the eye could see! Compass out, it was a bearing to pick the least painful route I could to Littledale Edge (which actually turned out to be pretty painful with a stiff climb at the end and becoming quite rough underfoot).

Littledale Edge to Dale Head was lovely ridge running. The Bob Graham route now in reverse. Great memories. I remember the view down to Buttermere from Bob Graham reccies and had to keep looking right just to see how good it really was.  I was enjoying this properly now. Legs felt good. Views were great. I was maybe just inside the top 10 (I was probably about 6th here but I didn't know it) and I had a lovely descent from Dale Head to Honister ahead of me. What's not to like! Well, there was something I was a little worried about - water. I'd carried half a small bottle of water inside my pack for emergency use only - only to be used if my main bottle was empty and I was on deaths door. I think I used it around Butteremere Moss! I was now getting twinges of cramp, but it wasn't getting worse and I knew / hoped that the streams dropping to Honister I remember from my Bob Graham would have plenty of water in. They did and what a relief. After topping up and necking a whole bottle, I must have had smiles from ear to ear.

Lovely running now up to the Fleetwith Bothy then across rocky paths to Innominate Tarn off Haystacks. My route from Innominate lost me a few minutes (2?) as I should have followed the fence down more but instead got nearly cragbound on big boulders. Just a bit of down scrambling then and I was on the horridly steep climbs up to Seat and High Crag. Not pleasant at this stage in the race, but I knew how bad they were so I'd got them dialled in my head.

I also knew how rocky the traverse of the High Crag / Red Pike / High Stile ridge was and yes I probably lost time on here, but I just kept on running wherever possible until I saw the marshalls at 806m. The next descent was a bad one for me - the only bad one in the whole race really. Feet were very sore by this point and I wasn't exactly sure of the best line but I went way too far east with hindsight. There was no path, then some path and it took me about 100+ metres further down than I needed to be. I got took by two guys here, so I went from 6th to 8th. Nevermind, I wasn't here for placings, just to have a great day out.

Just Mellbreak now then. JUST MELLBREAK ! Of all the climbs I've done in races, this has to be one of the steepest. It felt like Clough Head on the Bob Graham, but I don't think it was. Relentlessly steep grass. Boy, was I pleased to see the marshalls on top ! 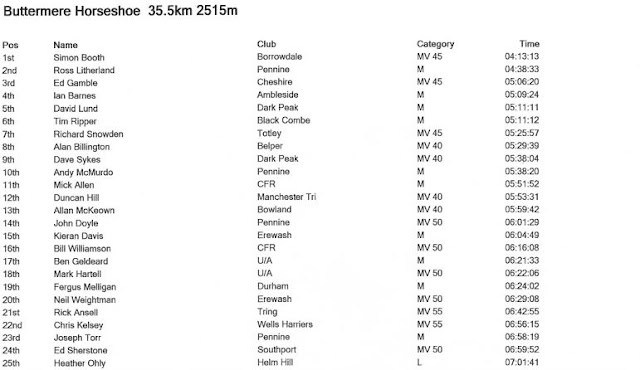 Quick drop down the gully to the W of Mellbreak then a gentle run down the path, past the Kirkstile and back to finish at the villlage hall. There was still a nice amount of people there to cheer me in. Phew! Thoughts turned to Cake, then catching up with fellow runners (yes, in that order) Which lines did we like ? Which did we blow up on ? Also nice to thank the kitchen staff who'd layed on a massive spread. They must have catered for 100-200 runners. Wow - that meant each runner could have about 5 cakes! I tried my best!

Stunning race on a stunning day. Nice informal feel to it at the start and end with good camaraderie on route. Yes, I'll definitely be back next year !

Hi Alan, glad you enjoyed the route - I love the photo from Whiteside to Hopegill Head. Do you mind if I use that on our website or the fellrace.org.uk website? thanks. Paul

Of course Paul. Go for it!

Hi Alan
Thanks for an enjoyable post with some fantastic photos.
Another race/route for my ticklist.
All the best
Steve

Hi Alan,
Just found this blog. Doing the race later today! Great read and incite. Here's hoping I enjoy it half as much.