Between Xmas and New Year I always try and get a 8-12 hour run in to kick start next years training and to help shed a few mince pies and Xmas cake from the waistline.  This years plan A was to help Saul reccie legs 1 & 2 of the Bob Graham. However with both Karl being poorly and my mum being under the weather, it was not to be so plan B was always to be a long peak district jolly.

To get around childcare issues, it was best if we ran from Midnight to midday which is the classic time that the Derwent Watershed race is held anyway so it felt 'right'. 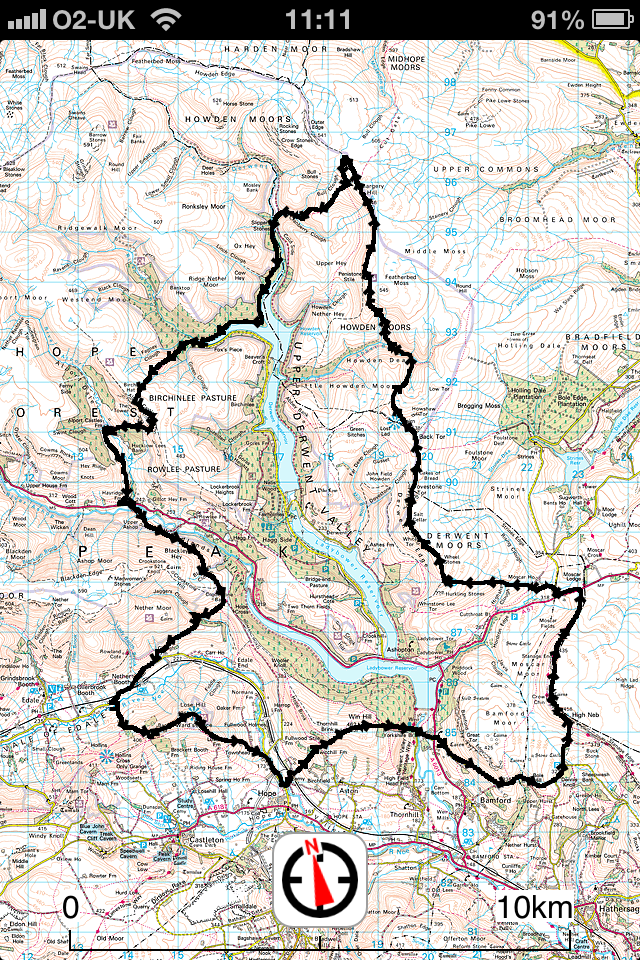 Conditions had been very, very wet over the xmas break but it hadn't rained for at least a day or so so rather foolishly we thought conditions may not be as bad as they had been. It was to be a pretty important test for Saul too as he needed to nail his nutrition for stuff over 8 hours.

We set off just before midnight on a still warm evening making good progress from Edale YHA as far as Stanage. It was plastered in thick hillfog up over High Neb area and Saul's stomping ground may as well have been the surface of the moon with the visibility we had. Progress slowed, but we got to Moscar without getting too cold.

Predictably, once up on Derwent edges conditions deteriorated again in the fog with anything that wasn't flagstones being very tricky to follow. Nevertheless, we got to the Foul Clough control with spirits and energy levels still high. With hindsight this is where things turned. We chose a different route to that of the race by heading more 'west' of Featherbed Moss. The route was a slow walk but was ok, however the race route which is a direct climb from the clough reaches better ground quickly.

On our approach to Margery hill we found the small trod, but although we were moving sufficiently well, the wind had now turned to a strong wind and driving rain. We soon came across Cutgate and I was starting to feel chilled. I knew how bad the sections ahead would be, so I pointed out to Saul that if we did want to cut the route short that this would be the point to do it. Saul dismissed any option of cutting it short so we pressed straight on without another word.

The next section is some of the worst terrain I've ever had the pleasure of running in. Strong winds and rain at just above zero are enough to chill you to the bone quickly. And that's if you're doing a slow run / shuffle. We weren't even managing that. The hillfog was still as bad as before so all our headtorches seemed to do was illuminate the fog. All this was bad in the depths of a winter peak district night, but what really stopped us dead in our tracks was the house size bogs. We were literally back tracking as much we were moving forward and all the time cooling down further and further to the point where I knew things were getting desperate. This is clearly where all the water from the wettest year on record was sitting, just waiting for unsuspecting fell runners in the dead of night. Those bogs were the worst I've ever been in and - on a windy wet cold night with thick fog were just too much for Saul and me.

In an instant we decided enough was enough so we headed due south off the boggy hillside. Impenetrable peat groughs stopped us dead in our tracks though so it was ages until we actually warmed up at Slippery Stones.

There's not been many times where I've had to back out of a situation on the fell with fear for how cold I was, but I suspected that there'd only be one outcome if we battled on especially with the miles and miles of bog we had ahead of us before dawn.

Nevertheless, we managed 31 miles over 8ish hours and got some good running in during the run back over Alport Castles.  Back early, so lots of time to spend making meccano / lego / scalextric traks with Lewis.
Labels: 2012, Fell, Fell Running, Ultra