After our day in Snowdonia in August, I thought it was about time I explored the Welsh hills a little more - after all they are around 1hr quicker to get to than the lakes and about the same as the Dales.

We set off from Nantmor at 825am quickly hitting bog and tussock. The weather was fabulous though despite a very strong wind, with views through a rising sun to Cnicht and the Moelwyns which will be the scene of future escapades I feel.

The hills over this leg were lovely and wild with a few areas of mining. We only saw one group of ramblers until we got to the Nantlle ridge which is always going to be popular..
We all found the climb up to Craig Wen tough - with hindsight my probably was my new fuel for the day - Maltloaf which - although it is continuous longer term energy release - was not what my body was used to. After Snowdon I switched back to Mars Bars and low and behold I felt normal for the second half of that leg.

Only major nav hiccup of the day was as we were enjoying the descent off Yr Aran before Snowdon, we completely missed the turn off left which meant a traverse on hands and knees to recover our path. One to remember for next time...

All that was left then was the worst descent off a mountain I've ever done (including years of Scottish stuff!) to pick up my bike for the cycle back to the car. I got to within 1/4 mile of the bike easily, but was faced with steep crags, waterfalls, gorse and brambles to get there. Not ideal ! Graham and Saul took a direct line to Petes eats which seemed a far better alternative end to the day !

Graham asked me if I'd consider doing the Paddy - well, I can't rule it out but at this point, it's just great to have some long days in the hills exploring new paths and hills. The scenery is great, but it's not the lakes so even though the lakes are more beautiful, the Welsh hills offer more wild running, which I must confess I love even though my feet don't today! 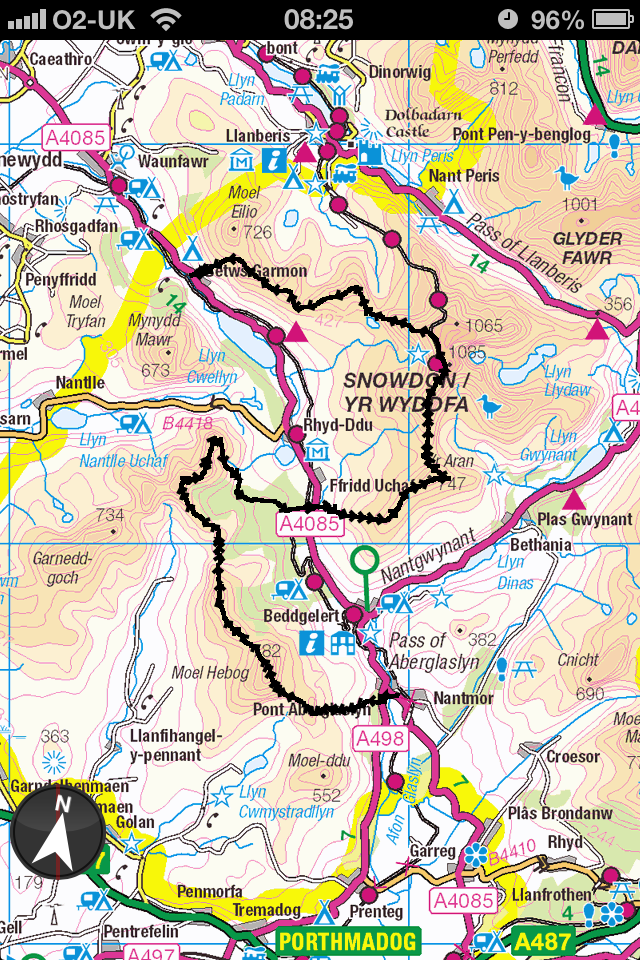