First BDL of the season always means one thing - pain!

This year though, I did feel a little better prepared going into race 1. Firstly I'd done hill reps with the club most of the winter. Secondly, I'd done the odd few fell races through the last month or 3 so I wasn't completely rusted up!

As we were going through a purple patch in the club, we had what seemed like a record club turnout - certainly a record number of new members anyway - fantastic to see. It feels like we're really doing something right.

After a reasonable warm up in my New Balance Zero Drops (don't know the model!) I felt like I was ready to go, so lined up on the start line seeing many new faces turn up and race for the club. I still had to remember to race well though - concentrating on the job in hand. After too many races where I've gone off too fast I'm getting better at doing the first quarter of the race just below max keeping breathing very under control and then slowly upping it. Pace was going well after a few miles, I felt comfortable so I thought I'd try and overtake a few.

All was seemingly going well until 3,5 miles in where we turned the final bend into the mile long finish trail. A "fatal" combination of ;
tipped me firmly into the red zone!!! Bugger. There was nowhere to go now - just let the foot off the gas, get breathing sorted then take off again. To my horror, Tom was only just in front of me now - he was clearly feeling it. I knew he should be well in front of me so I tried to encourage him on and told him not to sprint off else he'd regret it. Afterwards, he thanked me for this as he told me that he too was on empty! 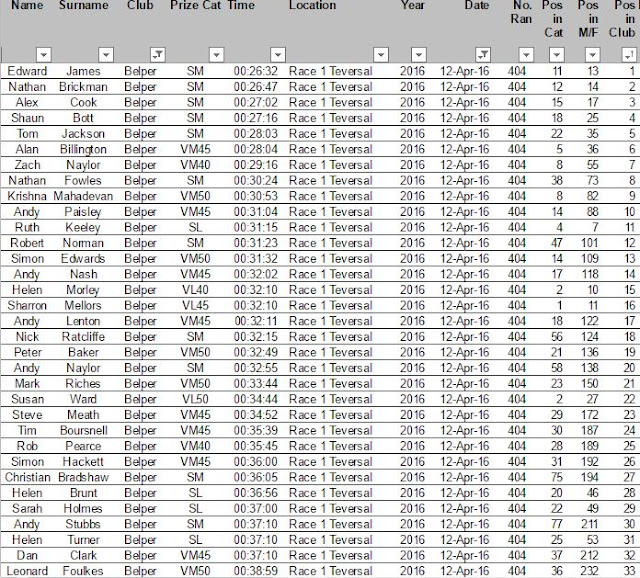