Learning to ride a bike...

Well, I've finally got round to using my 40th Birthday present from lots of you kind folks - a one-to-one tuition day with Ed Oxley of Great Rock fame.

Although I can ride fast and ride all day, cornering / balance and moving weight forward and backwards over rocky terrain is something I'm just not as good at compared to other riders, so that's really what I wanted to improve on with Ed.

It was about a 2 and a half hour drive north this morning which made a really pleasant change to half an hour south every other morning.  There's something about heading North - especially to Calderdale and Hebden Bridge - that feels so much more right than heading south. 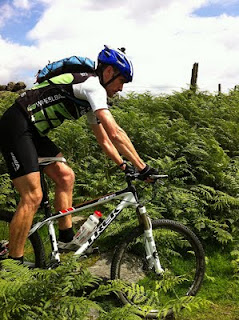 I know Hebden Bridge quite well having done some fell running there, some adventure racing, some mountain biking and of course the Mary Towneley Loop passes right through it.  It's a lovely small quiet town which is bustling with unusual shops and boutiques and loads of cafes more importantly !

Heading up and chatting, we were on the hunt for something 'cornery and twisty'.  I wasn't quite sure where I was going wrong when it came to cornering as people always make time up on me on a twisty course but Ed soon spotted it - well, he didn't spot it more to the point.  It seems I sit 'on' the bike rather than 'in' it. A good session of arm bending and leg and ankle bending soon loosened me up a bit !

Views were sensational as we'd climbed quite a bit quickly (as is always the case in Calderdale as much of it is quite steep).  After Ed thought I'd made some progress we headed down to practice trackstands which seemed completely alien to me (balancing a bike like clever gits do at traffic lights!).  I then admitted that I found cornering to the left easier than cornering to the right - Ed was very quick to capitalise on this as no sooner had he said it but we'd found a steep ish right hander that probably 20% of the time I'd get round.

After 3 disasters, my confidence was in tatters ! Was this really what I wanted for my present ?!? Anyway, attempts 4-7 were 100% successful thanks to looking ahead, leaning correctly and braking correctly. Down and out into Hebden Bridge for lunch - 30 mins or so lapping up the glorious sun eating al fresco. Very nice.

After lunch I handed over to Ed who I think by now had got the judge of my strengths and weaknesses. We did a good ride out (2-3 mile) to a stretch of the Pennine Way near gorple res. I could see a slither of singletrack climbing into the distance - this was it - what I'd feared and heared horrid tales of - the dreaded Hebden-tech !

Thankfully, Ed had lined up something right at the top end of my abilities - small drops and small rock climbs. After struggling on the first step up, Ed cheered me up no end telling me there was another one bigger still and one after that even bigger ! Oh god !!!

Anyway, I persisted with Ed patiently diagnosing problems and listening to my excuses, and eventually I cleaned all 3 steps 3 times in a row each. The last one was seriously tricky being a groove at an angle so at last I felt I'd done something well.

We ended with a beautiful climb, then picked up the Pennine Way again on a moorland contour, then picked up a 3 mile descent including some nice rock drops - some I cleaned, but some I didn't in Eaves Wood. All great stuff though  showing what absolutely fabulous variety Hebden Bridge offers.

I think I should have learnt by taking a full carbon bike to Calderdale - home of big rocks - that my bike might not stay intact for the whole day ... You can probably see from the picture to the left that my far side (right) KCNC bar end looks a bit droopy - well an early rendezvous with the ground showed me why carbon handlebars aren't the best idea  in tricky rocky areas.

"Never mind" I told Ed, "I'm sure my friends will club together and get me some new handlebars too!!!"

Brilliant fun day - thanks Ed. Lots to learn and lots to practice over the coming months. Pity the journey home wasn't half as much fun.
Labels: Fell, Ultra