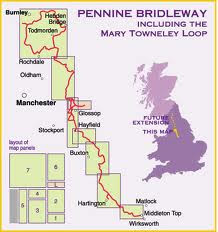 
Yep, the first words I think I said just after finishing yesterdays’ ride. Of course, some would argue that me starting at 1030pm was so I could finish in time for a pint ! Well perhaps there was a bit of that ...


The Pennine Bridleway (and double) was something that I found out about 3 years ago – whilst reading Rob Lee’s “7 deadly spins” reports.  It was a route that immediately captured my interest as;
As my wife said to me a few days before my attempt “don’t you think there’s a reason why only 2 people have ever completed it ?”. Just the sort of reassurance I needed !

Over the last couple of years I’ve slowly been chipping away at it. Teresa and me first did the loop at the top - The Mary Towneley Loop - 2 years ago. It took us 9 hours (despite numerous wrong turns) and both ended up feeling totally bushed.  I remember as we got changed after that ride Teresa said to me “so do you fancy cycling home then ?”. At the time, that seemed impossible but last year, I did just that.  Riding the Mary Towneley with Dave Bettridge then riding home with James Block - 120ish miles.  It was a long day, but as I had set myself no time deadline – it was quite relaxed and hence not too punishing on legs or head.


As further training for my yet unspoken goal, this year I thought I’d enter a solo 24 hour race to see how I coped with racing a day and a night. I entered Exposure24 at Newcastleton back in May which wasn’t that much of a big deal in the end. I didn’t push hard, as I wanted to complete it not race it, knowing in the back of my mind that this was actually training for something else I’d got planned....


All this was build up for something I thought was maybe possible, not probable. Steve Heading had done it in 22hours being the only time it's ever been done in 24 hours. Endurance meister Rob Lee didn’t quite do it in 24hours last year as he really struggled with some harsh weather so did well to even finish.


I never really admitted to myself that I wanted to do it. It was just too hard and almost unthinkable. Being a fell runner thinking of doing a Bob Graham Round – I can visualise that and fingers crossed when / if I do it I should get a reasonable time too. Thinking about the Pennine Bridleway Double however seems different - it has always been something that’s better not to think about – I was very tired after last years 120 mile attempt so how could I possibly do it there and back ? How could I climb nearly the height of Everest in a day ? What would I do for food and water ? What happened if I broke down ? Apart from the first & last 12 miles the terrain is very, very rocky and with the dry conditions of late – I found my back wheel slipping lots on loose stone climbs. Yes there are patches of tarmac, but really they’re just the equivalent of fire roads on any normal MTB ride – breaking things up a bit.

Solo and unsupported seemed the only way to attempt this. Most of the route you are in the middle of nowhere and – from memory – you only go past one shop on the whole route (Hayfield - although several can be included with detours). Water had to be gathered from streams too – some stretches of the route had plenty (S of M62) some had bits (Mary towneley) but often you wouldn’t see any. First aim had to be to complete it. If I did it in 24 hours that would be a bonus.


I’d set up a routecard which had timings for a 24h completion on it. Timings didn’t look too bad – 8 hours out, 7 hours MTL, 9 hours back. What could go wrong ?!? Thursday evening came and after trying to snatch an hours kip, Teresa got in from work and it was time to head off. Waiting until my watch said 1030, then off - no fanfare but that's the way I like it.


I was very lucky with the weather all the ride, but the moon that evening really was special. There was a couple of times I thought of turning my lights off but I thought better of it. The first big obstacle of the ride came at about 25 miles – Roych Clough. That's the third time I've been through there at night and again it felt a truly magical place - clear skies and just the noise of the stream which meant one thing to me - water bottle top up !


Trying to maintain fresh legs seems to be the order of the day on these rides, so not redlining it on climbs is pretty essential. Sadly I’d realised after I’d set off, that my usual lowest gear (22 front, 27 ultegra back) had been replaced with 24x27 after I’d failed to teeth count when buying my new front ring ! This made climbs throughout the day just a bit harder – yeah, like they needed to be !

With Roych Clough out the way, it was 55 miles of uppy & downy stuff until I got to the Mary Towneley Loop.  Again climbs weren’t as bad as they could have been and descents were a joy on my hardtail with a 2.25 Ralph on the back. Timings were roughly on schedule and my schedule was rough so I figured there was nothing to worry about.  All I had to do now was hope the Mary Towneley loop was easier than it had been 2 years ago with Teresa. Thankfully it was.


It was a fantastic ride round this loop that I know quite well now. The scenery is breathtaking and the riding awesome, there’s basically no tarmac and its amazing how someone has put together a route of such variety through some often densely populated areas. It's also amazing how there is literally not one flat stretch for the whole 48 mile loop !


6.5 hours later I was glad to be back at Summit feeling pretty good generally, so without stopping headed out on the climbs back to Hollingworth Lake.  Over the next mile, I noticed that there were patches of riding which I couldn’t remember or account for. I was clearly trying to fall asleep, so I got off the bike and the same happened again whilst standing up this time ! Nothing else for it – set the alarm for 10 mins time and get my head down !  I woke up feeling great so went off to tackle the bigger hills down towards Diggle.

Generally the return leg went very well. No back problems. Legs felt good. Not tired. Very saddle sore though and I’ve never been saddle sore before – I know what’s it feels like now to be a complete amateur cyclist – not nice! I did wonder if I was seeing sleepmonsters at one point, but maybe hikers do walk naked through the moors sometimes in Yorkshire !


Just Roych Clough to go then in terms of major obstacles. The descent to the bottom was brilliant – rocky, loose and the odd drop and rut.  I completely forgot I was riding at night. At Peak Forest I was 15 mins down on schedule. No problem though as I’d given myself an hour for the last 12 mile (easy) section. Shortly after Steve Heading headed out to meet me and then I met Teresa and Dave B too. This lifted me just as I was starting to lose consciousness again – lucky !


We were all happily chatting and enjoying the riding, passing tales of the day. Yes, my feet hurt and I was saddle sore but it had been a great day up to now.  We got to the top of the final climb above Chelmorton – this had been a major milestone in my head. I’d not checked my watch here and I didn’t know how far it was to go (my routecard was very sketchy !) but in my head I’d done it. It wasn’t until we crossed the A515 with 7 miles to go and I reached for an Eccles cake that Steve reminded me we’d got just 30 mins !


I asked him to set off at 14 mph and I’d stick to his wheel – well you can imagine how long that lasted.  It was dark now and his lights disappeared into the distance. I wasn’t disheartened though as my main goal was to finish and not to complete in 24 hours. Anyway, with about 2 miles to go I finally found something from somewhere. I wasn’t quite sure how but I felt sure I could maintain that pace for about 2 or so miles. I dropped Dave, Steve and Teresa with about ½ mile to go and for now (and without asking them) I’ve convinced myself that they just couldn’t keep up with my awesome speed...maybe they didn’t want to see a grown man cry as I crossed the line just after 24 hours !


Arriving at Middleton Top my watch said 22:30. I’d done it !!! I was now in the exclusive club of two which believe me is quite a nice feeling. Steve made me laff - after I finished in 24h he said "ah, at last I've got a friend now"
Teresa had the remains of a pizza in her car which was absolutely the best news I'd heard all day - that and that she was buying my pint !


A day I'll never forget - mainly because I'd spent less than £2 all day
Labels: MTB, Ultra

Awesome. Absolutely AWESOME.
Great to see you're still the man I used to run with AND SOME.

Wow...but don't give me ideas!