Sleepless in the Saddle (5 men in lycra in a campervan!) 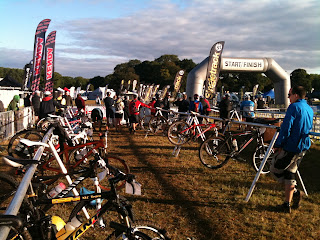 What a fantastic event that was !!!

My first ever team MTB event so just went along for a social more than anything with some of the riders from Buzz Bikes (Belper) and around.

Shop owner and ex Elite roadie Stefan rounded up 4 of us with last minute illnesses and dropouts making it a bit of a Thursday / Friday text-fest.  I don't know Stefan that well, and had only met one of the other guys from Buzz Bikes B team before, so it was going to be a great weekend all round in terms of general chin wagging and perhaps riding too.

It's only down the road (30 mins in campervan) so preparation was no hassle. On getting there, the campfield was absolutely huge. There were thousands of tents there, some vans and lots of bikes and fettling ! It's meant to be the most relaxed 24hour team event out there and I'll certainly vouch for that. Stef certainly did his bit though to make sure we knew we had to kill ourselves for the result he wanted !

On arrival, all talk was of the course. What else is there to chat about with 2 hours to go ! Tyre choice was not a topic on my list as I had two tyres on my bike and that was that. Mud, hardpack or grass - they'd have to do.  The guys used two main words to describe the course - rooty and twisty, with some sections you could barely squeeze your handlebars through. Nice - gonna suit me then - NOT ! 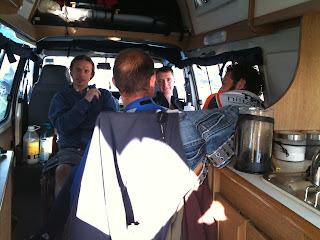 A quick reccie of the course with Ironman (type event) Simon was full of banter and the usual "I wonder how handy he is" chat without appearing overly enquisitive ! Thankfully the reccie wasn't full of roots and twists. Yes there were roots and yes there were twists, but nothing as bad as I had got in my head !

I was nominated first leg as they'd latched onto the fact that I could run. Anyway, it was longer than I thought at about 5 mins (and bloody fast too !). Think I got to the bike in about 15th place. Sadly, I couldn't find my bike so I reckon I lost 30 places there ! Never mind - I soon made em up on the first climb. Very long and very gradual - just what I like !

A rhythm would soon develop - make ground on the flat / downhill / straights, lose it on the twists and have people on their brakes almost rubbing into my backtyre.  The first lap was far too frantic to be concentrating on 'body positioning', 'balance' and other such words uttered by Ed Oxley the other week.  It was simply a matter of ;


The course was brilliant - lots and lots of singletrack. Nothing majorly technical, lots of fast sections. A couple of steep short climbs and about 40 mins long (not 1h15m like at Newcastleton which was too long).

It soon became evident that Stef was lapping a tiny bit faster than me and the others were slower. This was basically the order of the day until sunrise when Stef lost his pace (I think he bonked big style every bloody lap !!) and I stepped it back up after the loss of about 5 mins on night time laps. Stef then seemed to be lapping about 3 mins slower than me.

Results weren't taken too seriously really, apart from by Stefan, his wife Caroline and his daughters who were all keeping themselves very busy reporting back split times to us. At least someone cared what position we got !

We were not credited with a nighttime lap which didn't record as we went over the timing mat which meant we were actually 10th Enthusiast males out of 102 teams in that category. Not bad. If it would have been Stef and me we'd have been Top 5 easily.

Great weekend overall - a bit like a camping weekend with riding thrown in really !