I think I've always run in Walshes - they were the first fell shoes I owned way back in about 1999. Since then, I've tried Inov8's (a very very early model which I never wore), Mizuno and Adidas and never found any of them outstanding.

The thing I love about the Walshes is how you can easily get them resoled at Pete Bland for £30. I've had some Walsh uppers go through about 4 soles before I've had to buy a new pair of shoes 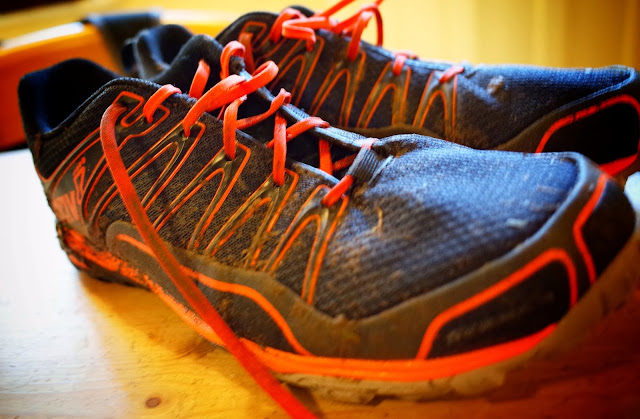 Over the last few months though I've done a couple of long runs in Snowdonia and couldn't help but think that I needed a little more cushioning around all those rocks. My feet felt especially battered after Saul and me did the 10h jaunt back in August. So, last weekend on the way to the Lakes, we popped into those very nice folk at Accelerate in Sheffield which is just off J34 of the M1. Accelerate was I think recently voted the UK's no1 running shop and for good reason - massses of shoes and some gear - generally focused on the outdoors, but also touching on road and track. Last time I was there I went up specifically for my New Balance Minimus minimal trail shoes which I've loved from day 1.

This time's visit was no less successful. Although I didn't get to use them in the lakes last weekend, I've given them a thorough session yesterday and today clocking up just under 4 hours in them.

Initial impressions in comparison to the Walshes
Note that all these comments refer to the Inov8's without their footbeds in.

Heel to Toe Drop - feels better than I expected - very akin to Walshes. These are stated as 6mmdrop but I'm not sure what Walshes are. These certainly do not tend to heel strike.

Resistance to Rocks - Proved very good and the main characteristic I'm looking for in this shoe. Quarry trails with rubbled descents weren't even noticed.

Stability - No issues again although not properly tested. I expect them to have better side stability than Walshes as they are wider. I struggle in walshes with rolling over sideways on my ankles, so am keen to find out how these turn out.

Grip - Muddy descents were in abundance this weekend and these only faultered on stuff that Walshes would have come unstuck on. Generally good, but I need to test them on rocks more.

Feeling Fast - More padding under foot than walshes and at the end of both runs I felt springy despite no food. I've not run for nearly two weeks, so neither shoe was actually fast in practice! I love walshes and they feel great in short fast stuff. It remains unclear for now whether I'd go for the Inov8's when running down the running track over the Walshes. At this moment - I wouldn't.

Ultra Running - I expect the underfoot cushioning and rock protection to prove superior on the Inov8's when your feet really do get a battering and you can barely walk to the car afterwards.