We'd been to this race last year - back then we'd come down just for Lewis's race on a perfect summers evening. Parwich is such a lovely little Peak District village, with the village green with the swings n stuff on for kids being opposite the Sycamore Inn - doubling up as the village shop.

I'd read online that there was a BBQ after the race this year - well, that swung it for us! There was also a local BDL league race on the same night - but Lewis's race, the BBQ plus the mens race meant there was no decision to be made!!

I cycled there to warm up and got there just as Lewis had crossed the line to take the win - beating all the older kids too who had to do two laps. Well done Lewis ! Chris and Andy had also made the same decision - hills taking the preference for fast n flat for all of us. Chris had done well, bringing the whole family down to race - 2 kids plus Emma - he knows how to show his family a good time!

The race was more undulating than hilly which is probably why the pace seemed very fast from the off - no major climbs to slow the fast road runner types down ! As we approached the Tissington Trail (which we were told was about 30% of the way into the race) I snook a look over my shoulder - and sure enough Andy was there about 15 metres back. Bugger !!!
Bang goes my chance then of even thinking about relaxing! I had to really push on during this race to keep the other guy sitting on my shoulder from coming past - he was so close he was breathing down my neck! Well, after lots of ups and lots of downs and me opening every one of the many many gate for the guy behind - he only still tries to overtake me in the finishing sprint! I was less than impressed after holding every gate and him not trying to come past. Thankfully I held a bit more back for the final sprint than he did. Phew - 9th place and 13 seconds in front of Andy who I think ran out of his skin.

Lovely BBQ after including a well earned pint with Teresa, Lewis, Chris and Emma. Well done all ! 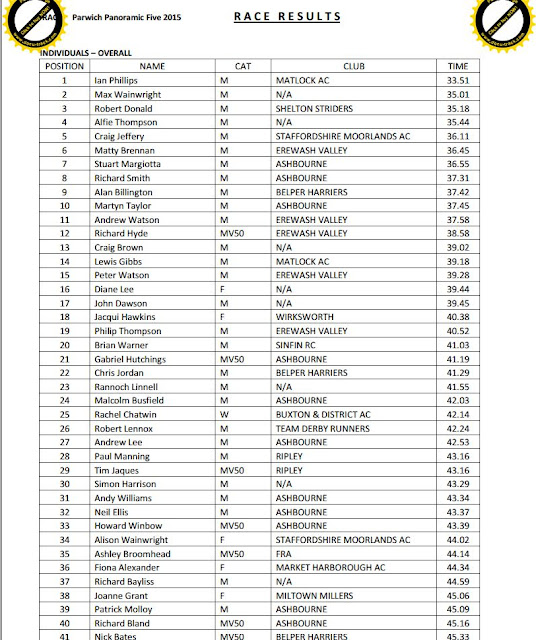