Entering this was quite a big thing for me really - I'd entered the Fell Running world by doing Lakes Fell Races and Mountain Marathons and used to do up to 2 per year - mainly LAMM, KIMM (that was), the OMM and some Saunders too. The last one I'd done of these was two weeks before Lewis was born - since then, I've moved into Ultras and local fell races so these have fallen by the wayside. In fact, the last one I'd done of these was actually in exactly the same area and I was lucky enough to have won the KIMM A Class that time with Simon - lets hope the area would come lucky again!

Nathan and me had tried a local 3h Peak Raid event together last Autumn which we enjoyed, so after sowing the seed about doing one of these together, Nathan followed it up with a text in January and within a day we were booked onto the Saunders Bowfell Course. There's a range of courses mostly in pairs for safety. The easiest will be short and mostly on paths with controls not being above cloud level and the route to the midway camp being not too hilly. The hardest team events tend to have a lower %age of paths (we were almost entirely on tussocks, rocks, bogs, bracken and moorland), a high amount of climbing (2,000m+ normal for Day 1), lengths of 20-25miles on Day 1 and controls located at a higher average altitude - so the chances of them being in the cloud is therefore higher - all good! There are also 2 solo courses on this event - experienced fell runners only here please!
Looking back on my Strava timeline, I've not run over 2h since about Feb, so needless to say I had to disguise this fact from Nathan for as long as I could - at least until the end of Day 1 I was hoping !

Nathan was new to all this never having done one before, but I knew he was made from the right stuff after I'd put on the kit list "Sleeping Bag - circa 500g" and I'd not heard anything back! "Pot Noodles" and "Mars Bars dunked in Custard" were also met with approval so I knew it'd be a great weekend!

Backpacks were down to sub20litres (mine felt quite empty but I never let on!) and I think walking to the start area at the bottom of the Ullswater hillside - we were both filled in equal measure with anticipation and excitement as we waited to find out where our 10 checkpoint locations were on Day 1.

Although we'd not discussed it specifically, I took on the role of main navigator and Nathan the "checker" - he's good with a map but hadn't done these before so I'd take the lead on bearings and contour work. The day started well - straight to Control 1 but then unfolding the map saw us faced with the longest leg of the Day. The leg had a choice - a longer route going up to the main ridge, along it on paths then a quick down / up / down and over to the control - OR - the route we took - over about 4 valleys through tussocks not on any paths and over to the control. Can you work out now what I'm gonna say with this one?!? Yes, we lost 20 mins here, but more importantly - we wasted so much energy. Never mind - we found it straight away and nailed the rest of the Controls. They were always very well located. I was going to say "hidden" but they aren't deliberately hidden - it's just that if you are more than 10 metres from it - you may not see it as it just sits on the floor. When located at a "Stream Junction" - it is amazing how many stream junctions you will find within the 100sqm that you are searching. Also "Crag Foot" - this is my favourite as there's always a range of crags and you can never see the foot of the ones above or below you!

Each control would take a similar theme - as we approached the previous one, we'd start making our route choice for the next one. Upon dibbing, we'd then head off as fast as possible in the agreed direction, maintaining as much pace as possible up across and down before having a prolonged chat about who was feeling the most tired! Heavy showers punctuated the high ridges and cols which coupled with some strong windy blasts meant that I had to reach for my waterproof a few times in the day, but mostly preferring to run cool in short sleeves and shorts. Due to the clear weather, navigation was little real issue so route choice was the main issue to separate teams. 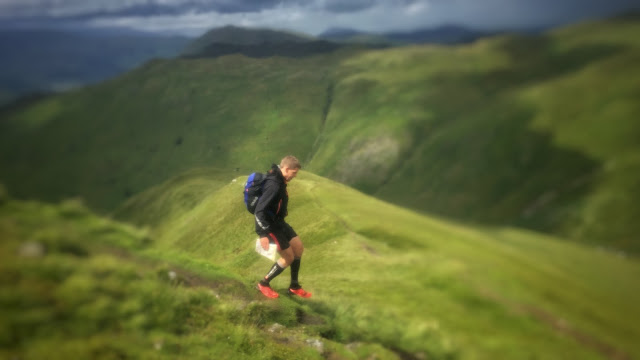 As we approached the last few controls of the day, it became very clear that we were both equally wrecked already - especially when - after running the beautiful Gray Crag ridge with views to die for an a herd of Red Deer to boot, Nathan said "so the control should be somewhere at the bottom of the valley then". "No mate" I said quite clearly ... "it's right at the top of that hill in the distance". The few seconds silence said it all. It was a massive climb but at least I knew we had it to come. Nathan didn't - oh and what a climb it was - it's actually the one in the top picture with both Nathan and me doing large sections of it on all fours - we had no standards at this point in proceedings so damage limitation was the key. We both must have been moving so so slowly but we were wringing every last ounce of energy out of already tired bodies so we just struggled up in mutual silence.

Soon we approached the final descent to the last control and the finish. As we neared the bottom, it became clear that there'd just been quite a serious incident and mountain rescue were on their way. The hill was seriously steep and very long. Mainly grassy, I was wondering just how much more dangerous it would have been had the conditions been bad? Anyway, after the event we found out that there were 2 incidents in exactly the same spot about 3 hours apart - we wondered why the rescue helicopter was hovering for about 5 hours in total!

We found out that at the mid way overnight camp we were in 9th place out of 45 entrants on this course. Quite pleased but tinged as always with so many "yeah but if only we'd have..." etc etc! It was over 2 hours after we'd arrived in camp that we saw Kieran Davis - a very strong runner and coupled with Neil Wightman we thought they would beat us into camp. It turned out they had a worse day than us navigationally and had also been badly caught out by just how hard day 1 had been. We were all dreading Day 2 so promptly headed to bed early, ate loads of food and generally rested the legs and feet.

As it happened, we woke to a beautiful sunny dawn on Day 2 and a slightly kinder course - only 18 miles on Day 2 compared to 23miles on Day 1, but more importantly only 4,500ft of climb as opposed to 8,000ft on Day 1. Nevertheless, it was mostly on tussocks still so it was never easy. Route choice was 'nailed' for all controls (with us getting fastest splits out of all runners on 3-4 and 4-5!!) - well I say nailed - mostly anyway. Admittedly, for the final 30 mins of that second day I told Nathan I was running on vapours - the tank was empty. That's also when things started to go wrong for me / us. Finding control 6 was harder than it should have been without my full concentration. Control 6 eventually came (thanks Nathan) but when I thought 6-7 was just a downhill blast on a path it turned out to be our worst control of the weekend. Firstly it was through really rough marshy tussocky when I'd hoped it was paths. Next - we headed to the wrong place - and when we got to where we were heading - we had no idea where we actually were on the map ! Fantastic! At least another pair had done exactly the same thing so we shared problems and still really really struggled to find the actual control at the correct junction. If we'd have taken a rough bearing at control 6 we would have seen that we'd gone too far East.

Thanfully, the finish was only 1/2 a mile downhill in lovely sunshine - but blimey I was properly on empty by now! After finishing it was an effort to even get to the car, let alone climb another Lake District Wainwright like Ed and Helen from the club had done - harder course next year guys !!!!

Summary
All in all a fantastically hard weekend of running, navigating and camping in the high fells - not many better ways to spend your spare time now is there ?
Results here, 10th overall in Bowfell
Strava links here and here
Nathan's Blog write up here
Overall stats, 12hours of running, 12,500ft, 40 miles and 90-95% off path (which is what made it so hard)