Around spring every year I get a little niggle at the back of my mind to dust the bike out of hibernation and get out and do something decent - something worthy of a blogpost even!

I'd spoken to Wykeham previously about his plans to do LEJOG shortly and saw on Strava how he was cranking out some decent long backpacking rides so I knew he was getting the miles in. Whilst browsing through the web one day I came across this series of Welsh long Audax rides which were all dedicated to Mike Hall - the TINAT series. TINAT stands for "This is not a Tour" and as you can read in this article Mike Hall was very much the person who would just go out and ride - nothing organised nothing official just head out for a long day - and I believe he was from Wales too so often that would be through the Welsh hills.

So I menitoned the TINAT 300 option to Wykeham and to my amazement he agreed - with the caveat that he may well backtrack on it when he realised exactly how hard it would be!

STATS:
* Our extended version of the original 300k ride was looking like about 210 miles.
* This would have approx 6,000m of climb.
* There would be at least 5 offroad sections

As we had absolutely NO idea how long it would take and to enter into the spirit of it being "one very long ride" and not "two day rides linked together with an 8h kip" we would take basic bivvy gear if we should need a quick kip at any point.

ROUTE:
We liked the look of the original draft route but both felt there was a little too much A Roads and not quite enough offroad. Hence we added a few more offroad bits and lopped some road bits - I can't remember the changes now but perhaps the section after Staylittle was an additional? 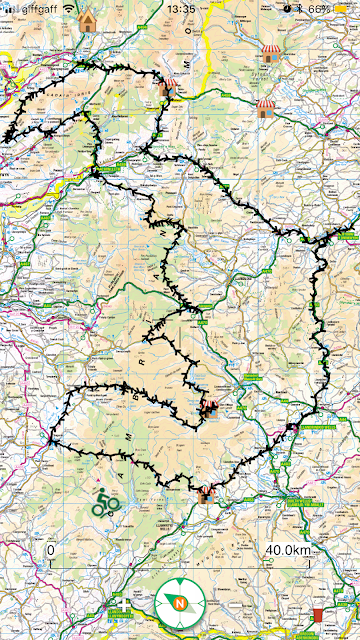 To make it more "manageable" we broke it down into smaller sections which can be summarised here;

SECTION 1 : Newtown >> Beulah. This was mostly in the dark and was generally remarkably flat and on main roads. I say "main roads" but lets get this clear - this is Welsh main roads and they are about as busy as B roads in England! I think it was Wykehams first night riding and generally it went well apart from it still being bloody cold until the sun popped it.  The moon overhead was very clear and lots of stars were visible too. Towards the end of the section the sun started to appear over the  horizon - much to our pleasure as we were quite cold!

SECTION 2 : Beulah >> Tregaron via the Devils Staircase. This would be a new section to me and it looked lovely on the map and like most sections on the  day - it exceeded expectations. The lanes leading up to and after the Devils Staircase were truly stunning and as a bonus we had a lovely low sun as you can see from the two photo's below. There's only a couple of 25% sections on the staircase itself but it goes on for a little bit more than Wykeham wanted I feel!
SECTION 3 : Tregaron >> Elan Valley. We would have two offroad sections here - a very gentle flat introduction to life offroad through some lovely marshy nature reserve (see first photo below), then a long climb up to the Teifi lakes before the Claerwen descent. I'd done the Claerwen section with Dave a few years back but this time it would be a descent not a climb. I'd also done a Mountain Marathon (running) round this area many years ago and distinctly remember the high level lakes at the western end so I thought I'd show Wykenham them via a small diversion. And what a diversion!!! As you'll see from the photo below it's a lovely spot to relax - very remote and very quiet - one chap had even driven his car up and erected a small tent next to it - no doubt having a very offgrid bank holiday weekend himself!

This was a good place to have  a break before we did the longest section of offroad on the whole route. The next two photos show Wykeham crossing the ford and then a nice panorama with the dam just about visible.

We ended the section at the Elan Valley Visitors Centre - again a wonderful place with large cafe and generallyt very quiet considering the weather and that it was a bank holiday.


SECTION 4 : Elan >> Llangurig. A truly stunning section that really surprised me and Wykeham. The tiny road going north from the Elan area alongside Craig Goch Reservoir in particular being one of the nicest sections of road I've ever ridden - it must have been good as the Triumph owners club were having their "Trans Cambrian Tour" down through there too and I bet they know the best roads!
This did lull us into a false calm though as very shortly after (out from Blaenycwm) we encountered some supersteep offroad following closely by the steepest section of tarmac I've ever ridden (closed to cars unsurprisingly). I think this section to Llangurig is now called a "Mountain Road" - not surprising as I'm not sure many cars would make it up it! I'm glad we hadn't gone any slower through this section as when we walked out of the cafe in Llangurig at the end of this section the owners put the closed sign up.
SECTION 5 : Llangurig >> Staylittle - We added a large chunk of offroad variation to the original TINAT route here. And what a beautiful variation it was - alongside streams and then through woodland to pop us out just shy of Staylittle. See photo below. Staylittle was around the  halfway point of the  ride at about 100miles. We both had certainly felt fresher!


SECTION 6 : Staylittle >> Machynlleth - Again this next section is I think an additional offroad section to the original route - a section which I've done most of before with Lewis and which I had good memories of. We headed over the ridgeline south of Dylife - now getting very warm (around 4pm) and views in every direction. We had a large drop (giving a suitably large climb out!) before the superb track riding past Glaslyn lake which then popped us out at the top of the superb descent into Machynlleth. Previously with Lewis I'd done this road descent as a climb so I'd not really appreciated the stunning views but I certainly did today. Whilst Wykeham shot off in front (as was the theme on descents all day!) I relaxed into the stunning descent. It really feels unlike any other descent I've done in the UK - you keep doing sections over rises which open up whole new vistas - there must have been about 4 or 5 new vistas that kept opening up to us. We were really lucky to see this in such beautiful weather. Oh - and as with all roads all day - virtually no traffic on it.
SECTION 7 : Machynlleth >> Dolgellau. We had a really good restock of supplies in Machynlleth as it was approaching tea time and we were about 130 miles in. We knew that when we got to Dolgellau most places would now be shut (probably after 9pm), so after much faffing, drinking and eating outside the coop we headed north through Corris and down towards the coast and Abergynolwen  where I treated myself to a pickled egg and coke - food of champions!!!

The next section was again impressive - I was particularly impressed with the "Birds Rock" valley however I'm not sure how much Wykeham remembered of this as very shortly after this we had to stop to give him a kip half way up Cadair Idris. And what a climb that was! Never ending and taking us apparently into thick cloud (when we'd been under perfect skies all day) my dreams of a perfect sunset photo were scuppered ... or were they!

After the 45mins had passed for Wykeham's kip, we set off towards the top of the old road climb in thick mist and eventually near the top I could see blue sky above us which we eventually broke through. After a short descent and reascent we were greeted by the scenes below which I will remember forever. This was coincidentally the viewpoint I'd most been looking forward to all the ride as I'd been to Cregennan Lakes before with Lewis so knew how good the area was. To top it all off this was BY FAR the best descent of the  day! All taken slightly too fast but why not when you're enjoying it that much.

We reached Dolgellau with our lights now on and luckily stumbled across a late night pizza / kebab place which was open. Heck - this beats a coop! Unfortunately Wykehams tummy had been playing up all day so I think he only ate 1 slice which as we would find out soon would not help his energy problems on the final section of the  ride.

SECTION 8 : Dolgellau >> Newtown - After the most shockingly long and relentless climb of the whole route out of Dolgellau I was starting to worry about Wykeham's safety as he was now extremely tired and we would be taking the next huge descent at 30mph plus in the dark so I reassured myself that he was in a coherent state to take it - and he was. Once reaching the bottom though he had to stop for another quick bivvy kip before pushing on. Sadly the  combination of a massive ride, not enough to eat and not enough sleep soon got the better of him so we deposited him safely behind a village hall on the agreement that I'd pick him up after sunrise.

A huge well done to Wykeham - previous longest ride was just over 100miles. This was double that with offroad thrown in too (plus some kit to carry).

Also - big thank you to the organisers of the actual event. We couldn't do the actual ride as it didn't fit with our diaries but what a stunning long day out in the Welsh  Hills it was.