For some reason, despite all the cycle touring Dave's done and all the back packing and long distance riding that I've done - neither of us had never "bike packed".  What I'm referring to here is travelling overnight on Mountain Bikes through mountains carrying minimal gear (ie no panniers).

I'd got lots of lightweight kit as had Dave - we'd backpacked round the Alps / Pyrenees & Dolomites together many years ago, but there was one gap in our gear portfolio - something to carry it all in on our mountain bikes. So, earlier in the year I thought I'd start researching the best way of getting all the stuff attached without breaking the bank.

There were plenty of online options but only one really that was affordable - the Alpkit Tapered Seatpack 13litre and their 13litre Drybag for the handlebars. All for £25 !!
Now I just needed a quick scour of the web for a route which was ;
It didn't take long to uncover the Trans Cambrian Way and in particular Day 2 of the TCW. It formed a loop which starts at Rhayader and ends a few miles up the A470 at Llangurig. Checking the map more closely showed that there were masses of Bridleways to the East of the A470 so we could make up our own route once over there, covering about 60 miles over 2 days.
Well, I say two days, but as this was a Microadventure then we really needed to shoe horn it in to as little time as possible. Plan was to leave after work, ride to camp spot, ride most of the ride the next day and head back late Saturday night. Juggling work, pleasure and family life is always a balancing act, so having Sunday with Teresa, Lewis & Mum seemed a good compromise. After arriving in Rhayader about 9ish we snook in a quick pint in a really nice pub before heading off out into the encroaching darkness in search of somewhere to spend the night !
After a few miles it soon became apparent that Dave's seatpack had a mind of it's own - first sitting too high, then too low, then too loose. With the right straps this would be perfect - in fact mine didn't budge all weekend, so something to change for next time for Dave.

The original plan was to head out to some small lakes at the West end of Claerwyn Res, but riding in the dark is always slower than you think especially when you take into account ;
After some really really nice riding (some pretty rough) we came across a flat patch of grass next to a stream about midnight. Perfect ! We soon got very cosey in the lovely and spacious Alpkit Ordos 2 tent on our Alpkit Numo mattresses. Those mattresses are really something by the way. That night was the best night's sleep I've ever had wild camping - by a long way !! I've tried everything from Bubblewrap, to thermarest, to balloon beds and nothing has come close to the Alpkit Numo. It packs small, is light and only costs £25. It also inflates so is very thick - something which adds comfort and warmth.  Having a hip flask of Dave's Penderyn Whisky really topped the night off well! 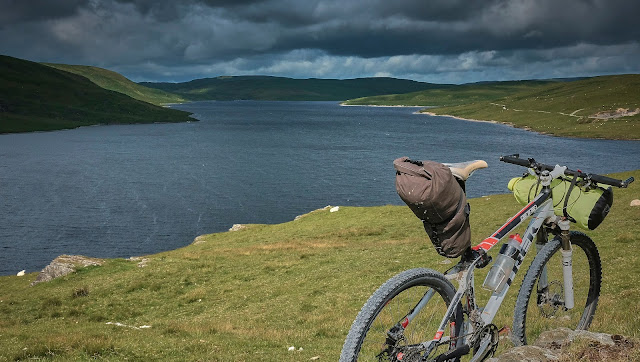 Day 2 dawned and we found ourselves in a lovely wide, open valley with the sun peppering the tent with early morning sunlight. It was lovely. No midges either! A quick Aeropress coffee and Pot Noodle and we were off again. This time west out along the remainder of Claerwyn Dam before heading north to Llangurig (handy cafe stop!) and then east to pick up the Trans Cambrian Day 1 route back into Rhayader. 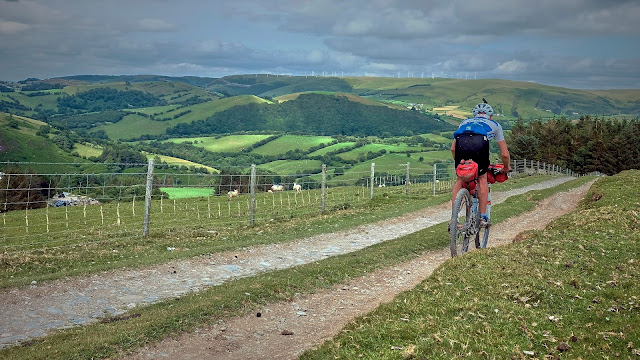 Riding always felt really wild and miles away from anything. Trails were very varied and 99% rideable. The views and the weather were the icing on the cake.

Time to plan the next bigger adventure then !
Labels: Bikepacking

What a cool trip and glad you guys had a good nights sleep in the Ordos and on the Numo (my favourite mat as well) Where's the bigger trip going to be then??

Just come across it as looking to bike pack up that way next weekend.

Wondered if you had a gpx file of the bit from Llangurig back to Rhayader.?

Struggling to plot it on my mapping software.