I've had a bit more of a normal year this year for Fell Running - lots of local races and even some runs and races in the Lakes including Borrowdale last month. To complete the set, I thought it was about time I entered another Mountain Trial.  I've previously entered in 2005 (Tilberthwaite), 2006 (Seathwaite & Borrowdale) and last year with Krish but it was cancelled due to the torrential rain and winds when marshalls couldn't even make it to the checkpoints themselves.

These really are classic events and are badged up as a "severe test of fellrunners’ mountaineering ability and stamina" and that "competitors are required to traverse difficult and often dangerous terrain, rapidly but safely. Navigational skills and route choice have a direct bearing on each competitor’s safety".  There's 3 courses on offer (S/M/L) with pretty keen cutoff times on each. As an added bonus is it's mid September every year which is one of my favourite times of the year to race and visit the lakes too.

Again, minor niggles leading up the race (right hamstring, left achilles and right quad now) were quickly forgotten when I'd got my number on and it got to my start time (9:40). I'd opted to run with vest top and bumbag this time, so yes - I looked like a proper fell runner! We were sent off for 500m up the road and then into a field where we were given the map at the bottom of St Sunday Crag. I'll break down route choices for each with thoughts at the time and hindsight now I've seen where others went...

ROUTEGADGET NOTE : Before reading the details of each control below, I'd recommend you familiarise yourself with Routegadget (link here) as I refer to it a lot. This is a fantastic tool that allows runners on orienteering events to manually or via GPS to plot their routes on the course map to show which way they went. It then applies some clever stuff to allow you to 'replay' runners against each other showing where time was gained / lost. You can also select "Mass Start" or "Real Time" and choose one leg, the whole route or replay 'by each control'. You will waste hours!!

Start to CP1 : My route wasn't too bad although at the time I felt like I went too high as several runners were zooming along under me closer to the valley bottom, whilst I was tottering on scree high up on the slopes! Looking at route gadget (here) most runners DID go lower, with Steve Birkinshaw heading round to the East of Birks
.
CP1 to CP2 : Straightforward as there was a large wall marked extra clearly on our maps as handed out which is not shown on the map below. CP2 was at the "Hole in the Wall", right on the wall funnily enough! It felt a good route as it was mostly runnable on the down section before the long and very steep climb to the control. Looking at other routes on routegadget (here) again shows that a low of runners took a more direct climb up from CP1 to Deepdale Hause. No reason why I didn't - apart from there was someone in front so it was easier to follow them!

CP2 to CP3 : I felt like I'd run this reasonably well, but I'd overcooked the detour round Hartside going too far east and meeting the wall before I knew it! I think the optimal route was heading north after Wintergrove Gill (which I remember crossing). Truth be told - it was the first good running on a path I'd had for hours so I just got carries away and hey - there was people in front again to follow! I think had I been on my own and not seen other runners around me, I've had gone over Hartside then followed the stream down from the summit to the control at the waterfall via Coegill Beck. See my route on the bottom map to see just how carried away I got with my running!

CP3 to CP4 : Big cock up it seems. At the time as I was in thick clag for most of it and it seemed ok apart from a stupid detour just before the summit of Stybarrow. What I didn't spot was the more direct route most others followed heading WNW over Randerside via Lurge Gill.  As it turns out my leg was 5 miles. Pretty hard going too as the climb was not runnable, the contouring to Watsons Dodd was runnable but only just and I was getting too tired. 5 mile though - I've done many fell races longer than that this year !

CP4 to CP5 : Straightforward. Hard running up tussocks, but I overtook about 5 runners here.

CP5 to CP6 : Straightforward. I headed further south than others here as I could see the good path down the valley marked on the map and it had my name firmly marked on it!!

CP6 to CP7 : Again, slight cock up but I must get the "longest route round Great Dodd" award! At the time it didn't feel too bad a route choice (apart from Gt Dodd) but I was tired and my feet were tired and my legs didn't really want to descend over more tussocks path the Ski Tow from Sticks Pass but I made slow work of it and got the eventually. I think I made the marshalls at CP7 laff when I said "guys, I really hope that you're as glad to see me as I am to see you lot". Yes, proper tired and achy now. 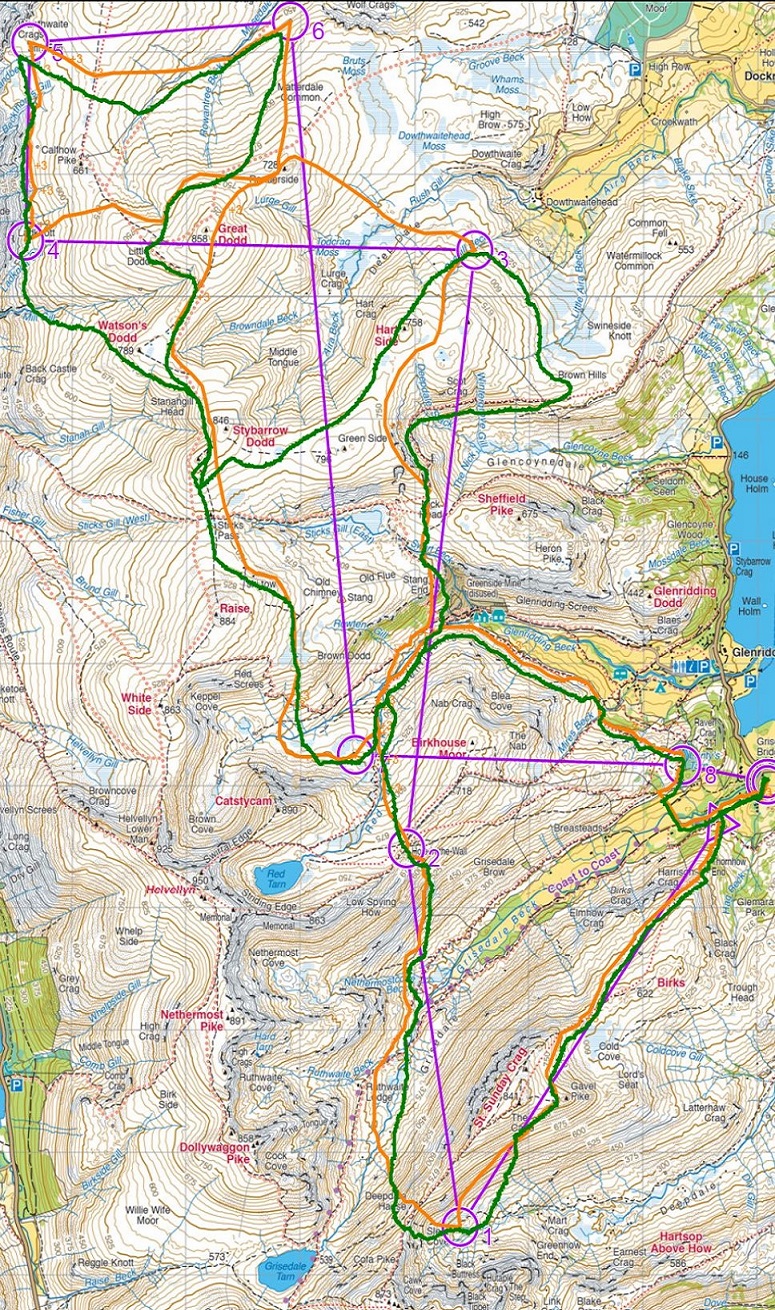 Overall, I think I was 34th out of 75 starters and was only 30 mins or so from the cutoff at many controls. It was great to say hello to Joss out on the route and gobsmacking to see Rhys and Hector zoom past me on the way up to the hole in the wall. Much gratitude to all marshalls - especially the old guy at CP4 who just had his sheepdog for company - oh, and "one of the best views you could ever wish for" as I told him.

Had my right quad not been niggling (from last week's exterminator) I'd have been running very well at the end, but as it happened climbs and lifting my right leg was painful. Ran out of food, but the fine post race food soon sorted that out - including cakes with a dollop of whipped cream on top !

Good report - very interesting. You went off just before me on Sunday (I did the Short) and on hearing your name over the tannoy I thought I recognise that name from the blogsphere. Coincidently, you mention Krish who I remember having a long chat with at Borrowdale last year. Guess he wasn't doing the LDMT this year - hope he's ok.

Thanks John - yes, Krish is fine although now he's living in Beeston he's a little bit loved up!