My build up to this race had been mixed at best. In recent months I'd managed to race in Borrowdale and The Lake District Mountain Trial and more locally the AL Fell Race from Totley - the Exterminator. Sadly though, despite little serious training since the Mountain Trial, both of my achilles were now niggling - aching when I got out of bed and on the first 10 mins of any run. Thankfully though they were not getting substantially worse.
The week before this event I bagged 3 60-70 mile bike rides to get some base strength built up without niggling my achilles. The day of travelling to the Lakes was a little rushed too despite me leaving work at 230pm, we didn't get to registration until 815pm. I say we - Graham had dropped out due to illness 2 days before which left me, Mum and Lewis booked into a nice cosy B&B.

Forecast for race day was bad and it certainly didn't disappoint when - upon waking at 4am for the 5am start - all I could hear was torrential rain.  It's never really a problem though once you get going - it's just getting out of your bed and out the door which is the real problem!! And it seems like the bad weather forecast (wet until midday) put lots of people off as of the 300 entrants, only 200 or so made it to the start line. Nice camararderie at the start and we were notified that the Scafell checkpoint was likely to be omitted with a reroute around Angle Tarn / Styhead Tarn to Esk Hause. I think this saved us 60-90 mins, but more importantly made it far less risky for the organisers and marshalls.

We got started just after 5am and we immediately found ourselves running through streams and rivers which hadn't been there just 6 hours prior! Coupled with headtorches for the first 2 hours this made for a very entertaining section - especially the river run to Watendlath. Great fun!

It was all going swimmingly (excuse the pun) until Seathwaite really where we started the climb to Scafell (well, Styhead Tarn). I noticed that despite a big bowl of porridge I needed food within two hours. Not a good sign I thought but pushed on. The climb was wet and rocky but all good fun with Angle Tarn coming around very quickly. Me and another guy were just behind Steve Birkinshaw, so in around 8th/9th. The next section from Angle Tarn was my favourite of the whole race. Boggy contour to Stake Pass, tough climb to High Raise, fast descent then boggy for several miles down alongside Wyth Burn. Epic stuff!!

I felt good when I got to the side of Thirlmere so pushed on straight through the Wythburn control point up the steep climb to Helvellyn summit. I pulled away from the guy I was running with at this point, but everything still felt comfortable even if I was having to eat more food than usual to stop that empty legs feeling.

The summit of Helvellyn came round quick despite thick mist but no rain. I was in 8th I think at this point. This is when things suddenly took a turn for the worse for me...

The descent started fast and easy as far as little man. Once out the mist however, I noted that the valley seemed closer than it should have done and straight in front of me.

Oh no.
Surely not.
I couldn't have.
{glance round to right}
Bugger, I had.
I'd gone down the wrong ridge.

Thoughts immediately turned to me wasting 10 mins and probably losing 5 places or so. Nevertheless, I headed back up. Well - I started to. Everything suddenly seemed very, VERY hard. My quads were aching, well really aching. They never ache on races. I felt really light headed despite me having eaten food on the climb.  There was just nothing left in my legs. Where did this come from? What was causing this? How would I get over it with 20+miles to go?

Once I regained the main ridge running seemed laboured. Not the usual kind of slowing you get in an Ultra but different. Way worse than that. I really felt like I'd done 2 Bob Grahams! All kinds of bad thoughts entered my head. Pack it in ? Pack in long races ? Stop running for the winter ? Pretty soon I dropped out of the cloud - just before Clough Head from memory and the views all over Lakeland were there in front of me. After about 20 mins of stumbling / running I'd pretty much accepted that the race was over, but what would I do ? Looking at those views the decision was easy - I was (kinda) running. I was in the high fells. I was in the Lakes. The weather was looking glorious for the rest of the afternoon. Easy - hobble to the finish it was then!

Descending off Clough Head was painful for my legs. Getting to Newsham I just had to keep stuffing food down me to stop me feeling dizzy and it wasn't working. A mile or so on there was a pleasant surprise in an additional food stop. What a relief !! Coke and flapjack bites went down a treat and put a massive smile on my face but running along the disused railway then uphill to Latrigg after I knew they'd not done an ounce of good for my legs. Still - by that point I was resigned to just getting round. Chatting, walking the climbs and running the flats and downhills (albeit painfully slowly!).

During my Bob Graham I made it up Skiddaw in about an hour. It took me just under an hour to get down from Skiddaw on Saturday - embarrasingly slowly! Still - with views like those in the top 2 photo's mixed with hailshowers it was a pleasure running the tracks round the back'o'skiddaw.

I crossed the line in 10h58 and 28th place. What a relief and what a lovely surprise to see Mum and Lewis there at the finish too. Absolute relief in finishing - something that seemed very much in doubt after that wrong turn on Helvellyn!

Postscript : I've since come down with a really bad cold. I had no symptoms on the day. Phew - that explains a lot ! 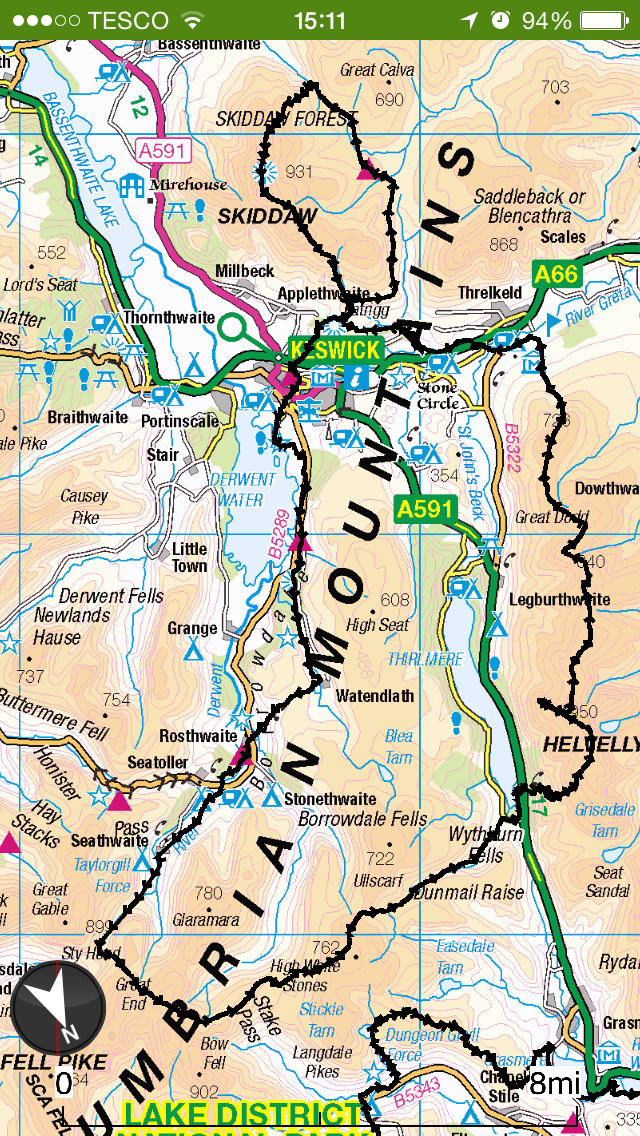