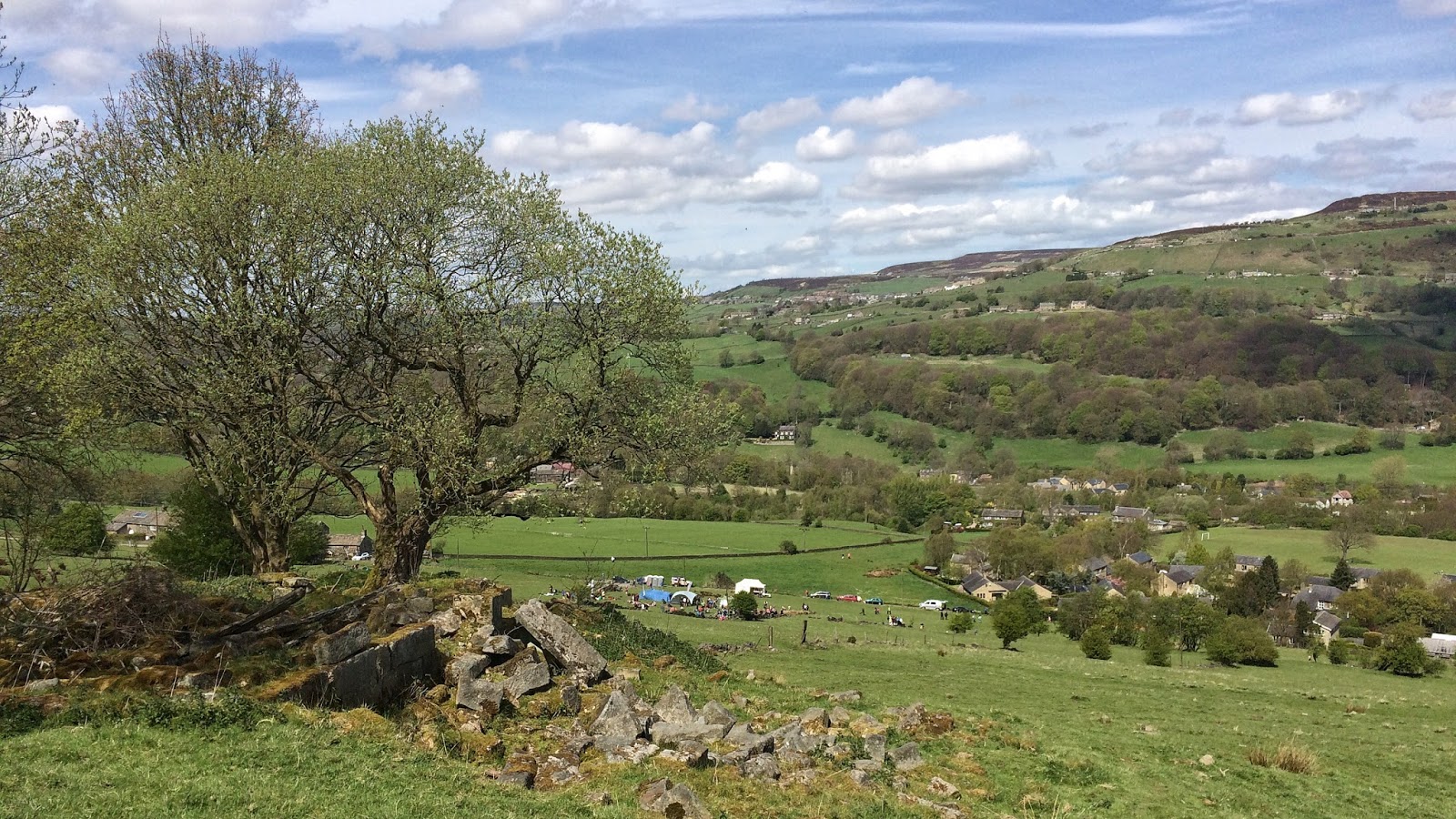 Nice little jaunt up to Calder Valley the weekend just gone. Always great to have an excuse to get up to that part of the world - I love it up there but it's even better when the sun is shining and there's a fell race to go to !
The Coiners race was 7-8 mile and around 400m of ascent so nothing earth shattering but as it fell on BH Monday it was easier for me to get to than my local race (Tigers Todger) on Wednesday night when Teresa is on nights. Dave fancies a cycle up a few big hills there too and of course there was Hebden Bridge cafe's at the end. What's not to like ?!?


I got there early and saw the tail end of an English Championship Counter in the junior series. Great to see so many young uns out getting muddy. A quick reccie of the first climb told me I needed to be near the front as there was a stile after 1/4 mile and then it narrowed through woods and went up. On the start line we were told that we wouldn't be disappointed with the quality of the bogs this year on the race "as good as ever" we were promised. What's this ? Bogs ??? I'd not run in mud since about September it seemed ?

As you can see from the map there's a steep first climb up to the high Erringdon Moors and then it's pretty much contouring plus a loop down and up at Stoodley Pike.

The start went well and I was in about 10th going over the stile. I felt great on the climb and with a bit in reserve moved up to about 7th on the high moors. I soon got overtaken by the better runners again and by Stoodley Pike I was back in about 9th. Hang on ? I'm at Stoodley Pike but I've not done the down and up loop ? I was following all the guys in front so perhaps there'd been a last minute route change I'd not heard about ? As it happens, all of the Top 30 or so missed the loop out. One way of getting a faster time I spose. Still, press on for some good contouring and maybe make up some places I thought.

Oh my god - that descent took me by surprise - those bogs! Big and wet and lots of em. It wouldn't have been so bad, but I'd given everything on the climb as I thought the descent would be a nice gentle brakes off exercise. How wrong I was ! I managed to cling on, but that's all it was - clinging on. I lost about 5 places on the run in with minor tummy problems forcing me to ease up a little too.

Great race, would love to do it again when it's wet and claggy - I think it would take on epic proportions then !

Met up with Dave in The Bike Den - a great Cafe next to the Canal in Hebden Bridge. They do lovely Bacon Cobs, Cakes and Coffee as well as offering cheap "pre loved" bikes for sale. Lovely place. Full Results here