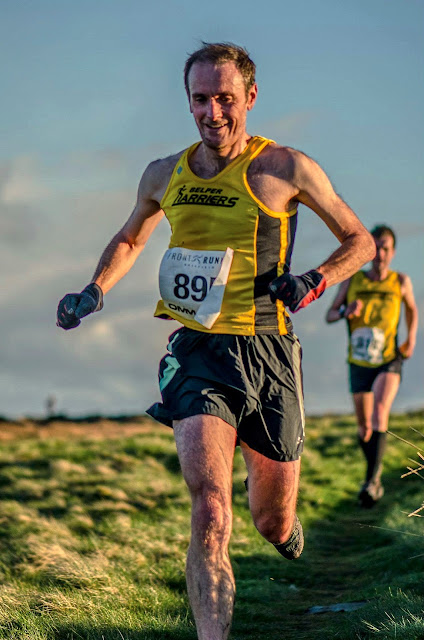 3rd year on the trot I think that I've done this classic local race from Totley on the west of Sheffield. This year, Nathan, Chris, Andy and me headed up early to get registered and loosen up. Well, I say loosen up - Chris was shaking out 30 mile from Saturday's Dukeries Ultra and Andy was juggling a concoction of painkillers for a shoulder issue (including codeine!) and not running for a week... something tells me Andy's not going to have the run of his life here...

The weather had been very changeable all day including some hail showers but things really picked up for the evening. Before the race started, I decided I was gonna run in gloves come what may - I've really struggled with cold hands this year, so if I put gloves on, that was 1 less thing to worry about.

I felt good going in to the race, biking had been going very well recently - feeling strong, and I'd started the "fellrace weekly" feeling that dominates most of the summer scene here in the peaks. We're sooooo lucky !

Lots of SHUOC guys on the start line and after their domination at Burbage, who would argue against them dominating again ? BANG - the usual lap round the cricket pitch was comfortably despatched before the very long drag up road and track to the first offroad section. I was with Mr Fishwick and the first lady - the latter soon pulling away quite convincingly. All seemed well until the trig when Darren started edging ahead. Over the stile and again about 5 guys came past me on the descent (picture above) - typical for this race to be honest.

The descent is awesome - fast and long. Sadly, it's followed by the steepest section of the race. Pretty relentless too. I passed about 3 of the guys who'd passed me on the descent but being mindful not to push it too hard as we still had a lot of running to be done on the horse field / road / cricket pitch.  I lost one place (to a great descender) and gained a place but felt great as I crossed the line to a very relieved feeling that it was all over again.

Another amazing Totley fell race. I had no idea if I was faster or slower than last year, but looking at last years results some folks were over, some were under last years' times. I was a few seconds slower. Really shouldn't be too worried about times compared to last year, but for some reason I was ? I don't normally give a monkeys about times but I was now for some reason? Looking back, I think I'd always been in 'reasonable' shape for Totley Moor, last year I raced well at Totley and this year I felt strong, so I suppose it's logical to compare the times.

Thanks to Chris for driving.