Another great local race last night and one I've not raced before.  Starting from Cromford Meadows, it goes along the canal, up the incline, round a few paths to the summit trig then back. Potentially a tedious route with the canal and incline in there but boy was I pleasantly surprised ! 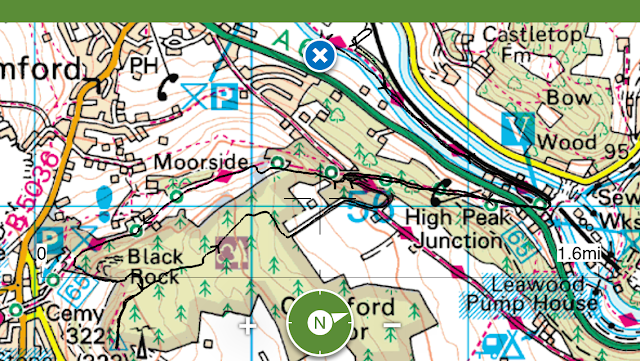 In theory, I should have been running well on this race. I'd cycled to Wales on my MTB the weekend and done a hilly loop to get to the race via about 5 hard pushes up some local hills. Plus, I'd had a couple of gels and I had no niggles. Strangely, I always run best when I've got my biking legs, so fingers crossed.

It was nice to see Andy Nash, Tom Moulder and Kath Beardsley all turning up to their first or second ever fell races along with Rachel and Steve who are old hands now!!

Quick warm up and we were off along a very sunny Cromford Canal. I settled in behind Kev Perry who I know is never far off my pace. Feeling comfortable I tool him near the end of the canal before we turned up the incline. As soon as the path turned upwards, Kev and 2 others came charging past me at a pace that made me look like I'd hit the wall ! I knew I felt good and I knew how long the incline was and I knew it got steeper after that and I also knew that I frequently go too fast early on, max out then do not recover in time. Not tonight !!!

By the time we got back onto the incline path (rejoining it after a nice detour into the woods) I went past them like they were standing still. I felt comfy so decided to take 2 more runners 100m in front, 1 of which was Tom!

As we got to the steepest part of the race - up to the trig - everyone slowed but I managed to keep a good pace taking Tom and catching some others. As ever though, I knew that if I took anyone near the summit they'd just come charging past me on the descent and tonight wasn't any different !
The descent was much more fun than I'd imagined though - weaving through rocks then woods picking a route which was really quite hard at full gas! I think I only lost 2 places on the descent (inc one older DPFR guy who was significantly faster than anyone else - Andy Dickinson). Again, I had to hold something back as I knew how long and flat the canal was right at the end.

I finished in 15th place out of 178 having run the best I've done in any race this year I think. I'm sure the biking has helped again. Thanks to Nathan for taking the shot above.

It seems there was a big gap behind me though - apparently a canal barge had come through shortly after I'd gone over the bridge and halted about 20 runners for 90 seconds - likely story Chris!