Well, what a disappointment.

It was all going reasonably up until the summit of Whernside - 112th and generally making masses of ground up on the roads and the climbs. Took about 40 riders between bottom of Ingleborough and top of Whernside. Didn't feel hard either. 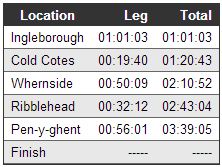 The descent off Whernside is bad - lots of drainage ditches on the 'top' section, then over the stile and it starts to get very tricky. That's where I had my first front wheel puncture. No problems I thought - take it steady and get it back up as quickly as possible. That was - before my pump pulled out into two pieces ! Thankfully, a very very kind spectator was standing next to me with a spare big pump - well I couldn't refuse could I !  I think I lost about 20-30 places but set off again to see more drainage ditches and 'those' rocky steps. Does anyone ride them ? No one I saw did.

After that - it's a fantastic blast along gravel tracks to ribblehead (with a few stream crossing thrown in), down a steep grassy bank to the biggest crowds of the day. A phenomenal feeling. I must say, I didn't even look up at Ribblehead Viaduct. This was a lovely section to ride with so many people everywhere. I was going well so it seemed easy to look "good" pushing hard, soon to feel whacked when out of spectators view !


Climbing up Pen y Ghent went well too - again overtaking 30 people according to the results. A couple of riders cried out 'whoa' and some spectators shouted that I was the fastest climber they'd seen. Well, I'm not sure about that but it was my sort of climb and I was loving it ! The climb and descent were again just classic stuff - quite some pushing at the top, but awesome on the way back down. Yes, there were several point where I had brakes full on, not slowing down at all - OMG ! All fine - until just above where Dave, Teresa, Martin and Lewis were standing where I got my second flat. I knew that if I got another, that with a broken pump it'd be game over.

Well, it was. Gutted that I'd missed the best and fastest descent of the day. Gutted to have travelled all the way up there to have not finished. Never mind - soon got my head round it, caught up with the guys and walked down holding Lewis's hand. Ah, bless him - I think he was more upset than I was !

I'd really enjoyed the early part of the race too - starting near the back of the peloton, I was passing people all the way to the first turn offroad. I probably started about 500th as not many behind me ! Simon's Fell was bad, ridiculously steep (hanging on to grass) but as a fell runner, this was a return to normality really ! Off Ingleborough it was virtually all rideable at speed, although I was a bit cautious. Good to finally drop out of the murk to see Teresa, Dave, Martin and Lewis, ready to taking the photo of me....


Will finish with this nice shot of Lewis and me by the van in the campsite at Stainforth. Ahhhh


So, to some up, it's really as much about upper body as lower body as it's pretty brutal on arms (with the rocks) and forearms - just trying to make the brakes actually stop the bloody bike ! Legs aren't tired at all really as there's not masses of cycling. Roads - yes, some climbs yes, but most of the proper climbing is a carry, apart from Pen y Ghent.

Top 100 and under 4 hours next year. The guys around me at the top of Whernside were all in the Top 100.
Two more great photo's I've just found - one of which you've just got to laff at...