First time I'd done this race and I'd heard it was a good one. Little did I know...
Chris gace Andy W and me a lift up and we were greeted by an absolutely massive queue to register - we thought there'd be less people turning up due to the England game being on at 8pm, but it was clearly runners turning up to avoid the football !

311 runners all in - one of the biggest fields in any summer evening fell race surely ? It was a really hot June evening and my legs were certainly well rested and felt good warming up at the start - I'd not run for 9 days (since last Tuesday's BDL race at Denby) and all I'd done in the meantime was Sunday's 65 mile cycle ride to Sheffield incorporating the final sections of the TdF Stage 2 route.

Ed was along so he was a good pace maker for me. After a lap of the cricket pitch, I soon settled in behind Ed on the climb up as it got steeper and steeper eventually popping out in the moor-y bit on Longshaw. Still up and through the bog and tussocks this race was certainly proving harder going than I'd anticipated. Eventually, we reached the long trail through longshaw which we followed for half a mile or so before heading off left down towards the lake and Padley. After leaving the track, Ed pulled away from me and all the group I was with. To my surprise I was only overtaken by two guys on the path down Padley Gorge which was good news. I'd clearly not looked at the map closely enough as when we got to the bottom of Padley, to my surprise we turned right past the chapel before going down to the river and it was a fair bit of a drag to the river too which I wasn't expecting! 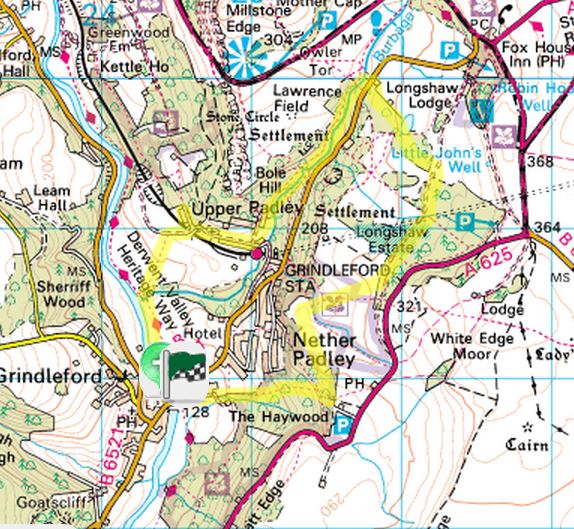 The river was rumoured to be 'deeper than normal' but it turned out to be almost sprintable - still deep enough for me to get very worried about my iphone getting wet though !!

I had plenty in the legs for the final sprint across the field and overtook 2 or 3 runners on the final run in.
This has to be one of the best if not the best Peaks Evening Fell Races I've done. The course is hard (climb gets steeper then ends in tussocky long grass) paths are small (apart from the track!) and there's a massive river to cross too. Perfect !

Very please with 16/311 which at Top 5% is one of my highest placings. OK - maybe the fast guys didn't turn up as they were watching the world cup !