Last night was Blacka Moor Fell Race from the Cricket Inn, Totley - the venue for the Totley Moor race a few months back. I'd done this two years ago and found it hard, so was looking forward to giving it my best shot this year to see how I found it.

5 of us headed up from Belper Harriers with Steve and Andy having raced on Tuesday at Riber, oh and Chris having snook in a 5km at lunchtime too ! 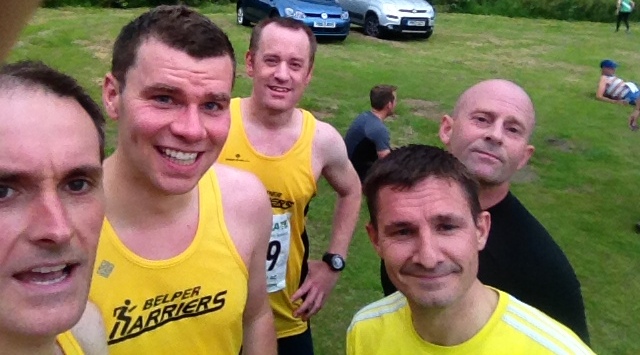 I felt deflated before the race but hoped that I'd run as well as I had done in the last few races as I'd ran well at the recent BDL, Denby and at Grindleford last week. This is a hard evening race and is like the big brother of the Totley Moor race - taking a bigger loop on the moors and sneaking in an even bigger climb on the second half. It's just shy of 1,300ft in 6mile. Totley Moor is a mere 1,037ft in 5.4mile.

There was just under 200 people along tonight, so in theory I should be in the Top 20? Going up the steep first offroad climb, legs and lungs felt ok - and again I concentrated on breathing and not the guys around me. As we got out onto the road, I stepped it up a notch and took a couple of guys catching up with Tim from work. He pulled away on the steep Heathery descent but I took him and some more on the track out to the road. The descent was lovely and fast before turning back up the second hill. I was tired when I did it two years ago, so perhaps that was why I remembered this race being hard ? No way - this second hill just kept on giving with a steep bit in the middle and the steep Heathery climb out at the end too! Yes - harder than I remembered! Thankfully, I didn't lose any positions on the descent either and just managed to keep cramp at bay down the final road and round the cricket pitch!

Chatting with the guys afterwards, the concensus was that this was our favourite race so far - proper hard, fantastic views with lovely descents and awful climbs. Perfect to get me in the mood for our weekend trip to Dent Music and Ale Festival the next day!